This is the trend inflation rate (percentage change month over the same month of the previous year) of the consumer price index, that is, inflation, or rather, to put it to journalists: inflation in Italy from 1956 to today: 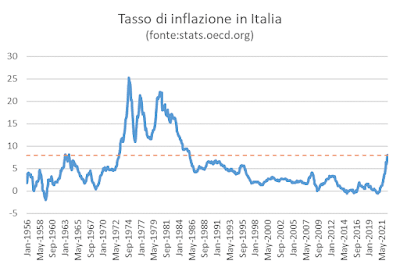 I don't remember all this story, but a lot, yes, from the height of my sixties, and in any case when you tell a story, you have to tell it all, which the best friends of the man you want to inform never do (while here we always try to do it).

The horizontal dotted line is set at today's level, precisely that of June 2022, which is a fraction of a decimal below 8%. I inserted it to make it easier for you to play the favorite game of the best friends of the man you want to inform, the "never at this level since …". In Italy in the period considered, we had inflation like that of June 2022 (i.e. 8%, rounded up) in February 1963 and 1973 and in October 1963 (I remember it very well: I was 10 months old and that's where I started losing my hair).

Conversely, we had an inflation higher than 8% in 160 of the 796 months considered, with an evident episode from February 1973 to January 1986 (because yes, dear scoundrels, inflation in the 1980s returned to a single figure, and therefore it was not double digits in the 90s …).

So, if I were a best friend of the man you want to inform I would have titled this post: "Inflation never so high since January 1986" (and surely some of them will have done it, probably wrong month or not believing what he wrote, because all – they – know that inflation was in double digits until 1999 …).

There would be so much to tell about this data, and we have done so on several occasions (just search for the "inflation" tag below and click on it). Here I limit myself to observing one thing, which should not be (although unfortunately it is) extraneous to the debate that is taking place today: the last take-off of inflation is very similar to what took place in 1973, which was noticed by others in other countries .

There would be some clarifications to be made. For example, inflation in the 1970s had spiked before the 1973 supply shock (a detailed account is here ), while we were in deflation before the last supply shock, which only a few idiots were happy about. But what I would like to point out to you is that historically inflation has always manifested a certain asymmetry, a "rocket and feather effect": it rises faster than it falls. A piece of this story is the behavior of prices in some markets, typically that of fuels, on which the writer has a fair amount of expertise (I don't want the awanagana ), demonstrated here , here and here (because even if I confirm that truth is not a political category, I can deny you that there are no politicians who know what they are talking about). It would be exciting to go into the why and wherefore of this phenomenon (not of the fact that there is a politician who knows what inflation is: of the fact that it is persistent …), and if I were still a researcher I would dedicate myself to investigating it. the causes.

As a politician, however, I should work hard to manage it (if I were in the Government) or in any case suffer (together with you) the effect.

The fact is that inflation will keep us company for a while longer.

I don't know why it occurred to me to tell you about it.

And you, do you know?