Thank you for the reply,

my email served as a testimony of the work that you constantly and painstakingly carry out.

It would be a pleasure to see the email published on his blog, maybe it will help someone to understand that it is not enough just to look through the keyhole or criticize choices made in particular contexts but it would be more useful to support those who try to carry on ideas that are shared.

Being a Pastrufazian elector, precisely from Terepattolese (on the seventh of June I was present in Utopia to listen to you) I will do for once what the voters of the PD always do and that is I will vote for the party but knowing with pride who it is composed of, aware that even my vote counts.

Dear Anyone [who is not any man],

I am very grateful to you for this demonstration of support at a time when in other environments, those of the media (social or otherwise), various types of campaigns are being unleashed against us (from the rut about the Russians of the various journalists, to the recriminations of those who first he voted for the grillini, then he abstained in the referendum on the judiciary, and now he reproaches us for not having defended him and for not having changed the world with 17%). Simple concepts, which real people understand, if they are not paid not to understand them (and without prejudice to the physiological share of Boeotians, who in any case are part of the democratic contest).

I add a consideration.

The left has two strengths.

The first is that of having occupied the ganglia of power not only and not so much in its communist (and then "communist") component, a component that in any case has the merit of having been able to methodically transform the local administrations of various regions (Emilia- Romagna, Tuscany, Umbria, Marche, etc.) in a nursery of the ruling class, as above all in its Christian Democratic component (left), as explained very well in the book by Rotondi that I commented on in my penultimate live .

The second is to preach the post-ideological world to destroy (demonize it) the identity of its opponents, but to practice the ideological vote. The man on the left (almost) never votes for the person, he (always) votes for the flag. The man on the right, partly because he is conditioned by the propaganda of the left and by an unjustified feeling of inferiority towards the left, does not vote for the flag: he votes for the person, about whom, however, he knows what the left-wing media are telling him.

A masterpiece, don't you think?

This is to say that at this moment I don't know where I will be a candidate (I know where I want to be a candidate: in Abruzzo, because I love it, because I grew up culturally there, because thanks to my parliamentary experience it has become one of the four regions to which I am linked for personal reasons – Tuscany, Marche, Lazio and Abruzzo – the one whose problems I know best and can follow political life better), but even if I were a candidate in a college where you cannot vote for me, I ask you to vote for my flag.

To give strength to people "like us" there are two ways: the direct one, which is to give us the vote, if it is possible to do so, and the indirect one, which is to give a vote to the force in which we honor ourselves in the military, even if in a given college it was not represented by people "like us" (which there is also to be defined better, but we can do this another time).

The left knows this (and in fact it foments the political parties who try to disperse the right-wing vote, parties that are not in the least the target of the journalists, despite the fact that within them they militate exactly those categories of people that the journalists until recently demonized: the so-called noeuro, the so-called novax, etc .: is it not strange that those who until yesterday were outcasts, objects of arrows and of a campaign of ridicule – in some cases well deserved – are all in all tolerated today?).

Unfortunately I have to agree with the considerations of an esteemed professor of tax law, now retired, which I recently learned from one of his students: in Italian politics there is a hard core of about 20% of anti-parliamentarianism (plus point, minus point) . This hard core was the backbone of fascism, it then recovered with the rise and fall of ordinary man, after which the Christian Democrats somehow managed to soften it, with its nature of plural and interclass force that everything it embraced and dissolved everything, but when DC dissolved itself it also re-emerged, physiologically, in the form of grillism. It would be useful for a sociologist of politics to tell us who they are, the Fascists. On average they are people with whom we would not go out for dinner, but maybe I'm wrong, indeed: certainly I'm wrong, because with someone, at dinner, I went out!

It seems obvious to me to point out that in a formally parliamentary Republic whoever is an enemy of Parliament is in re ipsa an enemy of change, even when he makes change a flag to be waved in the face of fools, as well as it seems superfluous to point out that apart from the guillotine among them, the only relevant result of the Jacobins was the 18th Brumaire.

Let's beware of the clever ones (or fools) who have replaced the flag of honesty with that of truth, and let's try to remain compact. We are there, I'm glad to know that you are there too.

Ps: if you don't mind, I would like to publish your letter (anonymously) on my blog. There is a silent majority of people who live a normal life and have no time to make noise on social media, and which in my opinion must be highlighted, protecting their privacy, to counter the defeatist project structured by the PD. Let me know if you agree.

From: Person Any <[email protected]>

I am writing this email to thank you, the premise is that in the past I have not been a voter of the League alas, but thanks to the immense work done by you, by the Hon. Claudio Borghi and many others, over the years he has opened my eyes to what the word POLITICS means and the commitment that people like you have dedicated and dedicate to it.

I hope that on September 25th my vote will also help give strength to people like you.

(… among the various theses in Rotondi's book, one of the most interesting and fruitful, in my opinion, is the idea that Italian politics has always been bipolar, even in the time of the purest proportional. that era, if you look back, remembers it and can easily read it as a dispute between the DC and the PCI. A conservative party, which did not want to be such, and a progressive party, which did not know how to be such. But in short, beyond of these judgments, the fact is that perhaps we could begin to think in terms of right and left, rather than center-right and center-left, given that the center, in a bipolar system, does not exist (I am reasonably sure that the results of the next elections will prove it, much to the surprise of the pollsters.) Today the League could easily occupy and in my opinion it already occupies the space of the DC – an inter-class party, which addresses the entrepreneur and the worker, which claims Christian roots but with a na liberal provision, and which is inspired by the Constitution of '48 in all its facets, including art. 5 and art. 11 – while the PD occupies the space of the PCI – a class party, whose reference class over time has become that of the assisted, which is why the workers vote for Lega, a party that draws its legitimacy and operational supremacy from ' connection to a foreign power, which after the fall of the Berlin wall is always a Union, the one that has remained, that is the European and not the Soviet, a party substantially enemy of a country that despises [since the days of the famous invective against the people of mandolinists made by the first of the best], and which is radically the enemy of freedom, of which it distrusts, for the simple reason that it fears that the exercise of it could corrode the foundations of its power.

The dialectic is this, I don't think there is anything else to add.

Then you have to decide which side to take, and everyone will do this in his own conscience. I do not care so much what decision you will make: whatever it is, it seems clear to me that I will accept it, not being able to do anything else! I will add: I will accept it willingly, having so many things to do in whatever world it will reveal itself after 25 September, many and, I add, all consistent with the project that was born here and is continuing here. I am interested, however, that you are fully aware of how your opponent acts, and gaining this awareness is not difficult, because there is the probationum queen : 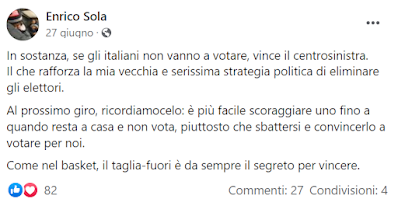 This is what the Piddini spin doctors tell us: our abstention is their only hope of victory.

Question follows: but do you personally know the various Foffolina34 and VperVaricella23 who run on Twitter advocating abstention to the cry, or rather braying, of #ionondimentico? Have you ever seen them with your own eyes, have you ever touched them – to shake their hand – in their physicality? At least one of these?

Because if that's not the case – and I believe that in many cases it isn't – then I see that being here hasn't helped you much . You have forgotten that since the time of the 2014 European elections, the PD had organized itself to influence the social debate, to tell the truth with not excellent results, and since then it has made progress, it has become increasingly shrewd, but not enough yet to avoid that the narcissism and arrogance of his area "intellectuals" lead them to reveal their strategy to us. Foffolina34 and VperVaricella23 who know how to speak so well to the strings of your heart are perhaps not "one of you": it is much more likely that they are one of them …

At this point, whoever supports the Piddina strategy is an accomplice and whoever falls for it is an asshole. Affectionately said, of course, and pro veritate , because the truth is like chicory: it has a bitter taste, but when you get used to it it becomes difficult to do without it. Try not to be manipulated. If you have read carefully, you will find that it is not difficult. If you let yourself be manipulated, you will pay the consequences much more than me. I know how to do many things and speak many languages. The only thing I can't do is help you defend yourself in the voting booth. There you will be alone, and you will decide. You could be the useful idiots of Enrico nomen omen whose strategy I have illustrated – refined, if it were not confessed! – or you can be yourself … )