We had just finished talking about global imbalances and how Germany's behavior had provoked a series of understandable retaliations by the US , that an old friend of ours, the old man who drives the wrong way on the highway, the bizarre conspiracy theorist who " poor Germany, everyone conspire by devaluing against her ", announces a nice consequence of these retaliations : 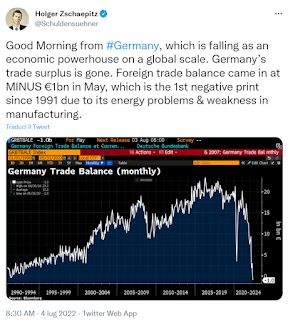 Now, since I trust a journalist's data as much as I trust the memes running on Twitter (anything not supported by a link to the original source gets trashed and its speaker blocked, and I don't give a damn if I'm left alone in the end. .), I went to check the official sources, which currently stop on Eurostat in April.

The picture that emerges is this: 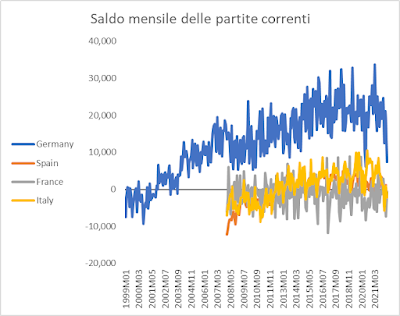 not very readable due to seasonality. Filtering it in a somewhat crude way with a moving average filter ( a low-pass filter – ingengngnieri, scanzateve!), The underlying trends are clarified: 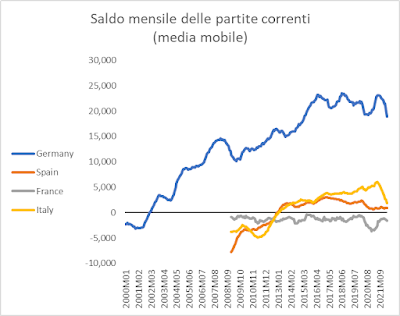 where what interests me and worries is not so much what everyone is worried about today (the German case, of which we may then talk), as what happens to us, that is to the yellow broken, which is, yes, in a worrying free fall without any precedent in recent years (while Germany had already experienced corrections such as the one we are witnessing in recent months).

In short, what the well-known terrorist Borghi always says is confirmed (and alas what I told you at the beginning of the Draghi cycle is denied): we are no longer in a position of foreign surplus, we are also starting France (and Germany) in a situation of twin deficits, which makes us much more fragile than we were at the beginning of the legislature.

As for the German case, what do you want me to tell you?

I can only repeat what we have said many times here: Germany has cut the branch on which it was sitting, and now it falls trying to cling to the twigs below. 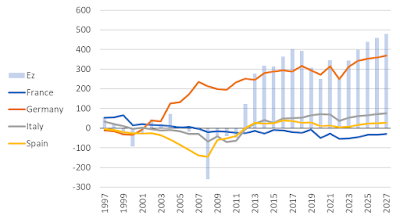 The austerity season represents for Italy and Spain (and other countries) the transition from a situation of net buyer of foreign (German) goods to a situation of net seller of goods abroad, assisted by a competitive devaluation of euro ( clearly visible here ), so that even the least competitive countries could sell abroad (in order to rake in the resources with which to repay Germany). As a result of this turnaround, the entire Eurozone becomes a net seller, as evidenced by the rise in the sky-blue bars, which represent its foreign balance. This basically depends on the fact that Germany had to sell elsewhere what it was no longer able to sell to us (having forbidden us to buy). You understand well that the buyer of last resort (the US) could have enjoyed this situation only for a while. In fact, Triffin's dilemma always applies: it is certain that to buy foreign goods from the US it is sufficient to "print" (rectius: issue) dollars, but the counterpart of this " exorbitant privilege " is, if it is abused, the loss of credibility of the dollar and in any case the loss of control of domestic monetary policy!

We had talked about it here about the TTIP , which in this simple conceptual framework was clearly legible as an attempt by the US to rebalance the trade balance with the Eurozone for its own benefit (by exporting more goods).

Much more effective for this purpose are the "non-price" barriers raised with the Dieselgate scandal : very high fines, collapse in sales and then a substantial ban on Diesel cars. A nice problem, which obviously the German friends have unloaded on their European brothers by imposing the green turn.

However, I would like to make it clear that one cannot be "Atlantic" and "green", because being green means putting oneself in the hands of China (for silicon, lithium, copper, rare earths, etc.), and putting oneself in hand to China it means not being Atlantic but peaceful (in the sense of the ocean), that is, ultimately, wanting war, not peace. The axis is no longer Rome-Berlin-Tokyo, it is Rome-Berlin-Beijing, but it is ending in the same way.

In short: you devalue the euro to sell me your products, then I invent that your machines pollute so as not to buy them anymore, then you throw yourself on the green and give yourself to the Chinese, then I force you to buy my materials prime, etc.

It remains to understand how the Germans will behave in their home, since, as I have just shown you, how they behave here depends on how much trouble they export to the rest of the world and therefore how many controcazzi bounce back to our home.

Of course, since they have raised the minimum wage , we can expect that their imports will increase or at least not decrease as much as the increase in inflation would have caused (thus causing a decline in the foreign accounts already proven by the increase in the prices of energy sources). . The fear of inflation (I wait for you …) then should lead them to raise interest rates, with the consequence of depressing investments in their home and increasing financial instability in the whole area.

A situation undoubtedly to be followed with some attention.

But the piddini, as is widely known, are thinking of something else …