A quick post, after a few days in which I have neglected you, to inform you of a couple of things, united by an abominable stigma: that of treating the abominable dung of the devil. I'm not sure, however, that you will be sorry, or at least not at all.

The limit to the use of cash

Let's start from the age-old question of the limit to cash, that limit that certainly conditions our freedom of movement (for the simple reason that electronic payment methods can be deactivated, for justified or unjustified reasons, without you being able to do much about it), a subject on which my colleague Siri has exercised , unfortunately so far without success (the minutes of the Commission attest to how many times I have pleaded his cause), and probably limits the evasion, indeed, according to Padoan maybe not !

The connection does not seem to exist, but what does it do? We have imposed the limit anyway, because Europe asks us to, indeed no, once again: because it is precisely the ECB that confirms in its opinion of 16 December 2019 the important functions that cash performs as a payment infrastructure without costs and essential for the financial inclusion of vulnerable segments of the population, specifying that any limits to the use of cash must be proportionate to the objectives to be achieved, and that in the case of Spain the limitation to 1000 euros was considered disproportionate:

and finally remembering that:

Meanwhile, in the last milleproroghe , with rapporteur Bordonali (Lega), we managed to pass the amendment 3,269 Bitonci (Lega):

to postpone the lowering of the limit from 2000 to the absurd and deprecated by the ECB 1000 euros to the end of 2022. So, with ease, between one betrayal and another!

In the electoral campaign of this issue you will hear about, and you will hear about the colossal nonsense, as in the case of "tachipirina and watchful waiting", for the simple reason that people do not read their cards. But after all even I, if I had not been president of the Commission, would have never been able to get to know the opinion of the ECB on cash limits … But if things go as they should go, we will be able to turn the page, and move on to deal with more important things. It's up to you …

I continue with an equally long-standing question, that of the financing of #aaaaabolidiga.

Politics costs: it costs to produce propaganda materials, including the indispensable facsimiles (since no one has understood how to vote), it costs to distribute them, it costs the people who help you, it costs the car that takes you around, it costs the boxes and audio systems, and so on. In short, democracy costs: but I assure you that the admirers of dictatorships do not make it a question of economy! It shows how much they are willing to spend for their favorite regime to succeed.

Generally speaking, quality costs money. To legitimize the frontal attack on representative democracy, it was therefore decided, among other things, to steal funds from its main interpreters, the parties, in order to apply Chomsky's well-known aphorism: 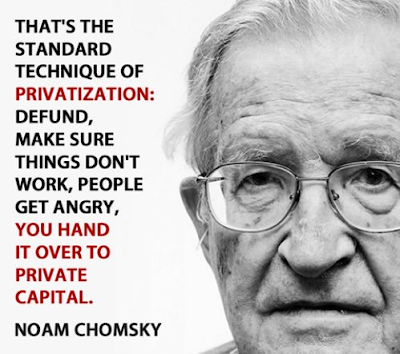 where to "private capital" we could replace "technical governments", and the discourse would spin. Then, yes, I know, it's worse than that: there were abuses etc. But then again, I agree with you: throwing the baby out with the bath water is a must, right? Because if the baby got into the tub, it's because he was dirty too, so …

to the members of the national Parliament, to the Italian members of the European Parliament, to the regional, provincial and municipal councilors, to the candidates for the aforementioned offices, to the internal groupings of political parties as well as to those who hold positions of presidency, secretariat and political and administrative management at national, regional, provincial and municipal level in political parties

the prohibitions set by art. 7 of the law 2 May 1974, n. 195: essentially, the prohibition on receiving funding from public administration bodies, public bodies, investee companies, etc. This prohibition previously (ie from 1974) only concerned political parties: from 1981 it was extended to parliamentarians in office, candidates, etc. . All these subjects, however, can lawfully receive contributions from the IRPEF subjects and from the IRES subjects of a private nature.

Also in the same article it is stated that in the case of contributions to candidates by the latter subjects (individuals and private companies):

for an amount that in the year exceeds three thousand euros, in any form, including the provision of services, the person who delivers them and the person who receives them are required to make a joint declaration, signing a single document, deposited with the Presidency of the Chamber of Deputies or addressed to it by registered letter with acknowledgment of receipt. Said funding or contributions or services, as regards the electoral campaign, can also be declared by self-certification of the candidates.

Below this threshold (and therefore up to € 2999.99) there is no requirement for a joint declaration.

The strange thing is that while the donations to parties give rise to a deduction of 26% of the amounts between 30 and 30,000 euros per year (for which the deduction can range from 7.8 to 7,800 euros per year, but does not apply to the donations exceeding 30,000 euros), contributions in favor of candidates are not taxable (therefore neither deductible nor deductible). In short: whoever gives to a candidate has no way of recovering.

The same stories we talked about four years ago are valid: the contributions must be tracked (and God forbid), so they must be done on a particular account that banks generally refuse to open to you (democracy is not needed for them), the candidate he cannot and must not dirty his hands with the devil's dung, but a person of his trust, the electoral agent, etc., must be in charge of this. (I do not bore you with the infinite Byzantine details that the justicialist delirium and the Savonarolian fury of the onestihs impose on us).

And the summary of this speech is: my election campaign has started.

It will be a lightning-fast and relatively expensive campaign. If you feel it is right to support me with a contribution, you can write to [email protected] for instructions on what to do.

Otherwise, friends as before: but since you have often asked to be able to do something, it seemed unfair towards you not to tell you what you can do, now that there is something to do …