But I made a pact with you when I started this blog, and I stick to that pact: a pact of mutual help in the growth of our awareness. Sorry for those who don't want to get over it, but let's move on.

Parliament is in theory among the most transparent institutions: everything is public and published (or almost, as we will see). You just need to know where to look. Each senator, for example, has his own card, which can be reached from the list of senators . Mine is here : 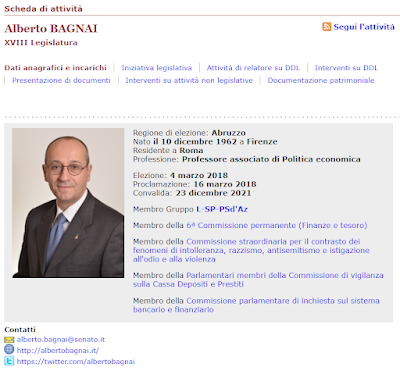 and you will find what is written there: personal data, legislative initiatives (the bills presented as signatory or co-signatory), the activity carried out as speaker of the bill , the interventions carried out on the bill (with videos of those carried out in the assembly), the presentation of documents (motions, interpellations, interrogations), interventions on non-legislative activities (for example, on votes of confidence ), and the patrimonial documentation.

These seem sufficient elements to evaluate the activity of your parliamentary reference, or those of others, but unfortunately this is not exactly the case. Even net of the fact that the activity of a parliamentarian is not just legislative activity, but political activity in a broader sense, and therefore, for example, involves intervention at various informal tables (majority, coalition, etc.) to define the political line on measures on which maybe your name will be missing because they are closed in the other branch of Parliament, the reserved meetings to decide on which names to rely on in the various rounds of elections or appointments, the meetings between the companies in the area and the experts of the various ministries, etc., remaining within the perimeter of the legislative activity, the Senate website does not provide some essential information , and it is on this lacuna that crafty and turncoat speculate to make themselves a misleading advertisement. I hasten to say that this is not a shortcoming of the site itself: providing all the information would be tantamount to providing none, probably, so that's okay: but we're here to deepen and clarify.

The starting point is the one we have complained about several times: as I have explained to you many times, the habit of legislating only by decree has now grown. It follows that ordinary legislative initiatives, in this legislature more than in the others, leave enough time they find. I do not exclude that there is some village Rodomonte who roams the moors of his territory to boast the merits of his bill on this subject, the one signed by him in person, a design that perhaps has never even been hinged (i.e. he has not been assigned a rapporteur and has not started the discussion in the Commission), and therefore has remained waste paper, good for deceiving the most distracted people.

The truth, easily understandable for you, is that in a world where legislation is made by decree law, the activity of the parliamentarian, rather than on the bills presented , must be evaluated on the amendments approved to the various decrees that went into conversion or to the laws of balance.

So, by way of example only, as far as I am concerned, the report of the activity made by the Senate website is slightly lacking (I repeat: it is not a criticism, it is a fact) because they are missing (from my file, not from the Senate website ) some amendments approved:

We agree that if you are not in the sector, finding this stuff, which in some cases may seem bagatellar or localistic (but a parliamentarian still represents the interests of a territory!), And in others has involved significant changes in the legal system tax or banking, it would be like going in search of the proverbial needle in a haystack, right?

On each of these amendments, and in particular on the first, there would be a novel to be written, but now there is no time to do so. I have to move in a little while. I leave you to your afternoon, and I'm going to finish mine in a city founded in 1179 BC (two years after Chieti).

This is a machine translation of a post (in Italian) written by Alberto Bagnai and published on Goofynomics at the URL https://goofynomics.blogspot.com/2022/09/scaldare-la-poltrona-teoria-e-pratica.html on Sun, 04 Sep 2022 12:55:00 +0000. Some rights reserved under CC BY-NC-ND 3.0 license.