(… from the wonderful world of engineers who study economics with Dr. Giannino – jokingly! – I receive and promptly submit to your revered attention …)

Marco left a new comment on your post " The moral of the Irish tale twelve years later ": My statement “foreign investment in Ireland has created many highly skilled jobs” is supported by this data . Looking at both Persons employed in science and technology and Persons with tertiary education (ISCED) and employed in science and technology, it can be seen that the skilled places actually increase. "If productivity is reduced due to the small size of firms, why did productivity run when these dimensions were even smaller?"

Here we would have to do a whole debate on economic history quite long. In summary, I would say because the world has changed, politically and technologically and even more in summary China, globalization and ICT. Today, labor intensive production in low and medium technology sectors is no longer possible, unless you want to make money like a Vietnamese. To make investments in more or less advanced technology, dimensions are needed to be able to absorb fixed costs and managerial skills. Things that are not there in small businesses, especially family ones. The political favor towards small enterprises and self-employment (to take votes, of course) means that in Italy there are more small enterprises and self-employed workers than in other countries, despite the fact that these are clearly less efficient than the large ones. The productivity of small businesses used to run (maybe), but are we sure it ran faster than large ones in the same sector? What kind of company imported the technologies that enabled the economic boom? Etc. etc

Italy has almost twice as many micro and small businesses as the main European economies. data Italy has a lot of self-employed workers. data Productivity grows with company size around the world. data Productivity grows with company size worldwide part 2. data This happens due to a lack of competition and protection through subsidies and ad hoc regulation to favor the little ones. "If" subsidies and easy profits discourage innovation "(boh?), Why shouldn't cheap debt (which is structurally a subsidy too)?" The sentence should be contextualized in the discourse on the bonus 110. That type of subsidy, of a very limited duration in time, reduces competition (who opens a company to exploit a peak demand of two years? Without considering that in Italy it takes almost a year to open a company) and does not allow investment to modernize production processes. I haven't said cheap debt isn't a subsidy, and I haven't said all subsidies are bad either. Posted by Marco on Goofynomics on Aug 4, 2022, 4:38 pm

Dear and respected Marco, you have worked a lot, I understand and I am grateful to you, but not enough and above all, forgive me if I point it out to you, you know little about economics and little about economics. I assume that you belong to that category that knows how to do things that they think are difficult and by virtue of this fact they consider themselves authorized to say anything in things they think are easy. Mind you: the right to say whatever is constitutionally protected and in this blog we tend to respect the Constitution. Still in accordance with the Constitution, however, it is also subject to the right of criticism, and therefore forgive me if I make some observations. I develop them from the bottom up because it is more comfortable for me.

I explained to you why he did it, you don't agree, we could also close it here and let time give us the answer, will you? In my opinion it is not long, and I know that you will come back here to carry out your considerations. More generally, for a couple of decades we have been haunted by a Boeotian journalism, that of the braggart of academic qualifications, who have inflated our pockets with the story of "devaluation that is a drug" ( often literally without understanding what they were saying ) , without understanding that the real drug is cheap credit, allowing not (so much) the public sector of a country, but (above all) its families and businesses, to live beyond their means. We are talking about this, that is, the fact that if a country cuts public debt by financing growth with foreign money, it will not end well. Do you claim yes? Amen. Buy Irish stocks and let us live.

Because you see, that you are not in the trade and do not follow the Italian debate (and you do not reside in Italy) you can understand it from many details. Not only from that "i" (article) that your keyboard wrote you as "I" (pronoun), a sign that you live in the Anglosphere, but also from the clichés about the opening times of Italian companies ( I believe that you does not know something ). I want to point out to you that the (distorted) version of the damages of the Superbonus initially provided by the Revenue Agency attributed fraud precisely to the ease with which it was possible to set up companies (alas in some fictitious cases) in Italy: a bit the opposite of that what do you say. Let it be forgotten that upon specific request the Revenue Agency had to produce this prospectus: 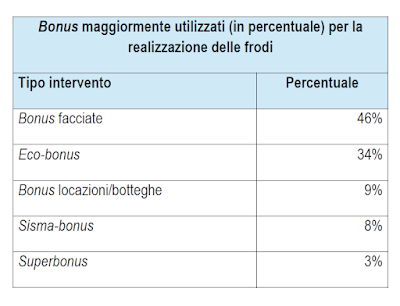 (hearing at Sostegni-ter on 10 February 2022). But this is another matter, which would take us far. What has prevented entrepreneurs from investing in their production processes is neither the length of bureaucratic times nor the shortness of the time span on which the measure was extended, but the uncertainty created by the government with noble but spurious reasons. The problem is not that there is no competition, but that there is wild competition. "Competition", a concept about which amateurs have much clearer ideas than professionals, is not a panacea.

As for your data: I will look at them calmly, now I unfortunately have other things to do. I've seen them in other forms and none of that data, but really none, answers the question my paper answers: why does Italian productivity stop abruptly in 1997 after three decades of growth at a substantially uniform pace?

Obviously you are free to prove the contrary, but the cherry-picking of "Giannini" articles is not considered an excellent demonstration on this side. Make a graph, or if you want I can do it for you when I have time, do a regression, make a paper : in short: do something!

I hope I was clear, and please: if you believe so much in the virtues of growth that skilled workers bring to a country, buy Irish paper.

You will be able to find a use for it.

This is a machine translation of a post (in Italian) written by Alberto Bagnai and published on Goofynomics at the URL https://goofynomics.blogspot.com/2022/08/ancora-sulla-morale-della-favola.html on Fri, 05 Aug 2022 16:38:00 +0000. Some rights reserved under CC BY-NC-ND 3.0 license.