(… I told the Irish tale here . I made its moral four years later, here . Twelve years later, the moral is always the same … )

Today I had an appointment with iMercati TM . We talked about this and that, I tried to provide an alternative world view to the one pumped by the best friends of the man who wants to inform, I don't know with what success. I can imagine their astonishment in being confronted with an average literate individual. To tell the truth, I too had to contain my astonishment at a certain point at one of their statements, which contained an implicit #famous as: "Sure, Irish debt also grew during the crisis, but then they are managed to decrease it … ".

But I remained human.

You must know (who has read The decline of the euro has learned from the first pages) that when iMercati TM talk about debt they invariably, infallibly, inexorably mean public debt. Private debt does not exist for them, they do not care, despite the undisputed cultural reference of the Bocconians admitted (with some delay, as you know) that the 2008-2010 crisis was a private debt crisis . To iMercati TM this information does not seem to have reached us, so much so that one might think, to be malicious, that their purpose in making investments is not so much not to lose the money (which is yours so much – mine not, because I'm poor!), As much as condition the political guidelines of governments, in order to influence the distribution of income (this is politics).

But we are not malicious.

There and then I kept silent, not having the numbers at hand, of which I could imagine the profile (but I speak only if I am absolutely sure, I am not satisfied with knowing ).

Then I went to see what the performance of the Irish government has been, and I must admit that it was spectacular, for good but also (and above all) for bad: 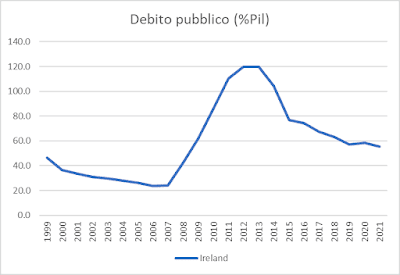 As I told you from the beginning, the nonsense according to which the financial crisis depended on public debt was easily disputed by observing the public debt of the first countries to go into crisis. One of these, Ireland, in 2007 had a public debt close to 20% of GDP (23.9%). In 2012 (five years later) the debt / GDP ratio had more than quintupled, reaching 120% of GDP. From 2014 onwards, an almost as rapid decline has brought it back to 80% of GDP in 2015 and then to around 60% where it has been since 2019.

Well, good, encore (even if the point of arrival is three times the point of departure, but the story is not over)!

Now you may ask yourself: what will have happened in 2013-2015 to bring down the debt / GDP ratio? If it collapsed by 40 percentage points, Ireland will have made frenzied budget surpluses, public service cuts and tax increases that would bring the public budget surplus close to 20% for at least a couple of years: a public saving. very high, to reduce the debt. And indeed: 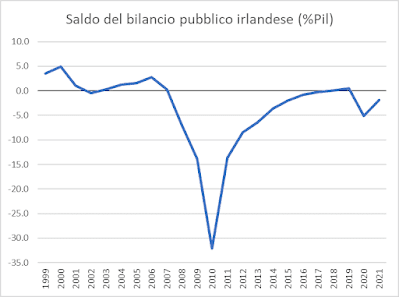 And how will this mysterious mystery of an off-scale decline in the debt / GDP ratio be explained in the presence of a deficit and not a surplus? The less distracted will remember it: like this 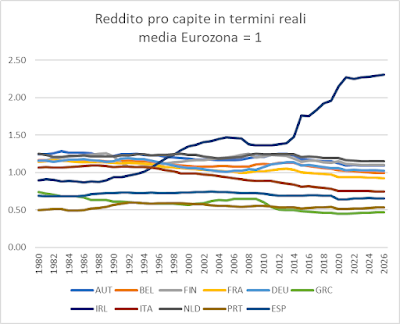 that is, with an out-of-scale growth in income ( the graph comes from here ).

Well, come on, the Irish were still good: they didn't do austerity but they were productive, they made reforms and therefore their GDP grew, freeing future generations from the burden of public debt …

GDP grew "funny", as they say in Rome, that is with (foreign) debts: 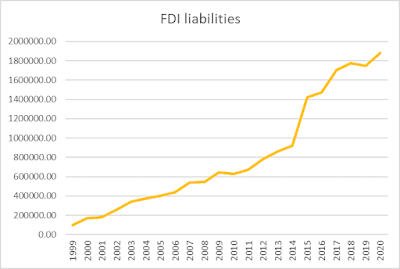 (always in the same post you will find the explanation of this gigantic leap in passive direct investments).

In fact, whoever, trained in the divine teaching of the latecomer Giavazzi, went to look at the trajectory of the net foreign position, that is, of the balance between Ireland's credits and debts towards foreign countries, in short: of the (net) foreign debt, would attend to this miserable show: 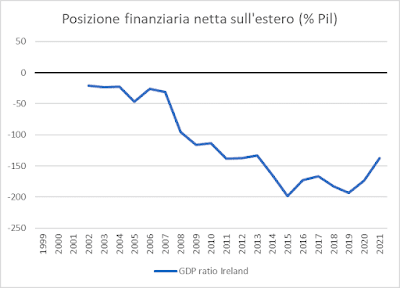 The upward jump in GDP that determines a decrease (of 40 points) in the public debt between 2013 and 2015 is explained by an increase of more than 50 points (from -134 to -198) in net external debt. A phenomenon of abnormal, absurd, crazy dimensions … but our friends iMercati TM either don't notice or don't care.

To give you an idea of ​​how abnormal this sinking in Ireland's net external debt is, I compare it to ours, so you realize: 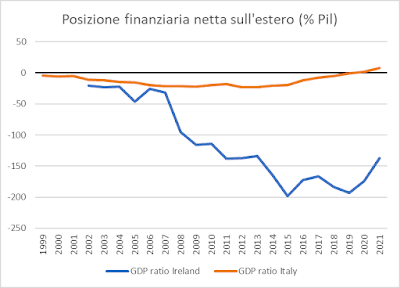 Not only was our net external indebtedness much lower at the time of the great financial crisis, but, as I have explained to you, we have recovered and are now in a net positive position. Ireland is also returning: it has only 140 percentage points of GDP to repay abroad to find itself in balance. We wish our friends the best of luck: in their meadows there will be a four-leaf clover for them too …

Having shown you the absolutely out-of-scale dimension of the phenomenon, I would like to point out why, in my opinion, it is not entirely appropriate to place Ireland as a model of virtuous repayment from public debt. This graph explains it, which confirms that the moral (and fragility) of the Irish tale is always that of twelve years ago: 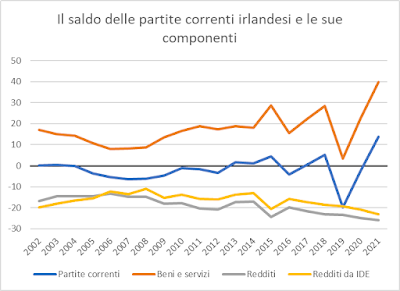 The Irish (blue) current account balance is relatively close to zero as a result of two opposing components: a strongly positive "goods and services" (orange) balance, and a strongly negative "incomes" (gray) balance, entirely driven by the balance. income from FDI (yellow), that is, from the profits that foreign multinationals repatriate from Ireland (which, being money that comes out of Ireland, have a minus sign in the balance of payments).

When will it (re) happen? I don't think so in a very long time, but in the meantime, please appreciate one point, the one that caused so much scandal at the time: the balance of FDI income is slowly but steadily deteriorating. The rest of the world repatriates an increasing amount of profits from Ireland: a "boderious" flow (that would have said), persistent, stable. FDI is not a panacea: it is money that someone brings you and that you have to pay. Ireland has to put in a fifth of its GDP every year. As long as it has it, all right. When she will be forced to borrow with foreign countries to pay off the foreign debt (as after 2007) the situation will deteriorate (but the public finances will obviously have been, up to that moment, in order, and therefore no one, except us, will have worried. …).

Useful gloss for preventive purposes: so does this mean that everything is fine with us?

No, I would say no. It would be very useful to bring down the debt / GDP ratio, and to bring it down with growth, like Ireland, and perhaps even using the lever used by Ireland in part and with extreme caution (the attraction of foreign capital). This is because the debt must still be served, and the public debt service (i.e. the payment of interest) takes 3.5% of GDP away every year: 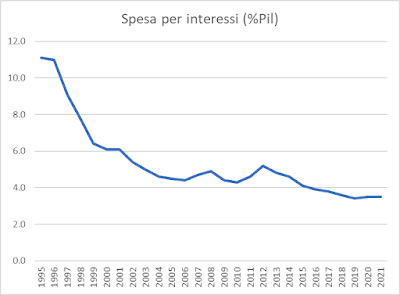 which is not 11% in 1995, and it is not even 20% and passes with which Ireland remunerates imported capital, but it is still a sum that would be better to keep in your pocket, also because if the rates "shoot up" it risks gradually becoming more relevant.

But Ireland, a country that we all love (or at least I love it, and here what I think counts), to which we are grateful for the many emotions it has given us, as well as for the contribution given to the nascent European identity (rising fifteen centuries ago, and still born …), Ireland no, not Ireland, not her, do not propose it to us as an example, because to grow with other people's money they are all good, as well as to hunt under the carpet of foreign debt dust of public debt.

Do you know what Keynes de iMercati TM said? Who prefer to fail conventionally rather than succeed unconventionally. But even there there are some deviants, and I know them. When all this is over, I will go to work for him, procuring him success in an unconventional way, and I will leave you to slaughter yourselves with Foffolina48 and Napalm51, the new organic intellectuals of abstention on Twitter.

I will earn more and stress less.

And now, we look forward to the QED future …

This is a machine translation of a post (in Italian) written by Alberto Bagnai and published on Goofynomics at the URL https://goofynomics.blogspot.com/2022/07/la-morale-della-favola-irlandese-dodici.html on Mon, 25 Jul 2022 22:03:00 +0000. Some rights reserved under CC BY-NC-ND 3.0 license.